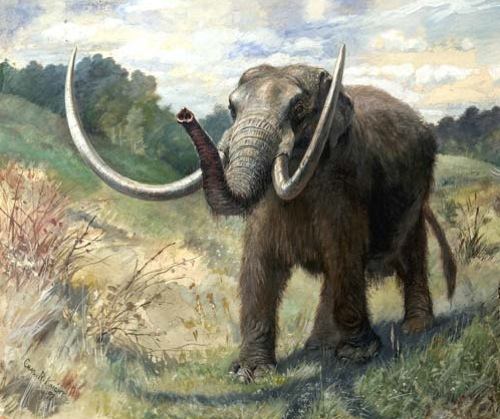 Welcome to Arizona Skies Meteorites® Mastodon fossil page. Below you will find a selection of fine quality Mastodon fossils. At Arizona Skies Meteorites® we specialize in providing highest quality fossils, meteorites and rare collectibles to museums, educators and private collectors around the world. We hope you enjoy browsing through our website and we look forward to serving you. Be sure to visit our home page: Meteorites For Sale.

Mastodons first appear in the fossil record about 40 million years ago. Fossils have also been found around the World in such disparate locations as England, Germany, the Netherlands, Romania, Greece, the Congo, and both North and South America.

While mastodons resembled elephants and mammoths, they were not closely related. Their teeth were quite different from those of members of the elephant family, having conical, or nipple-like crowns. These were an adaptation for chewing leaves and braches, while the relatively flat crowns of mammoths were better adapted to grazing on grasses. The name mastodon (or mastodont) is derived from Latin, meaning "nipple teeth". As the mastodon grew, new teeth came in horizontally from the rear of the jaw (see jaw below).

The American mastodon (Mammut americanum), lived from about 3.7 million years ago until it became extinct about 10,000 years ago.The American mastodon somewhat resembled a woolly mammoth in appearance, though it had a shorter, stockier build. Its tusks tended to be straighter than Mammoths' tusks and grew up to around 15 feet in length. The Mastodons' primary habitat was cold spruce forests. Mastodons became extinct about 10,000 years ago, along with most of the Pleistocene megafauna.


We can accept major credit cards on most items (through Paypal), cashiers checks and money orders. Arizona residents add sales tax. To place your order, or if you have any questions please feel free to email us: CONTACT