Welcome to our Gibeon Meteorite page. Gibeon meteorites are known as the "King of the Irons" because of their incomparable stability, beauty and ease of working. The Gibeon meteorite entered our atmosphere at an incredible velocity of around 17 miles per second an estimated 30,000 years ago. It exploded high in the atmosphere showering fragments over a large region of what is present day Namibia, Africa. Prior to this, the meteorite had traveled through space for over four billion years before it was trapped by the Earth's gravitational field and pulled to earth as a brilliant fireball. The Gibeon meteorite is classified as a group IVA fine octahedrite and is composed of approximately 91.8% Iron; 7.7% Nickel; 0.5% Cobalt; 0.04% Phosphorus; 2.4 ppm Iridium; 197 ppm Gallium; and 0.111 ppm Germanium. It was derived from the core of an extinct planet that was blown apart billions of years ago during the formation of our solar system by a catastrophic impact event. Though this meteorite was officially discovered by westerners in 1838, the indigenous people of the region had been making spear points and tools from the meteorite for perhaps thousands of years. The beautiful crystalline patterns within Gibeon meteorites are known as Widmanstatten patterns, and are unique to meteorites. These patterns can only form over millions of years of cooling. It has been estimated that it took about 1000 years for these molten pieces of planetary core to cool by just 1 degree Celsius! There isn't any material on Earth that exhibits the Widmanstatten pattern of meteorites, and each piece of meteorite has its own unique pattern. The beautiful crystalline patterns characteristic of the Gibeon meteorite are more than just beautiful oddities-they tell us about its composition and how long it took for the planetary core from which the meteorite is derived to cool!

Caveat Emptor: As the price of Gibeon has gone up over the past few years, there appears to be a disconcerting trend of some individuals offering the Rust-Prone 'Muonionalusta' meteorites as stable "Gibeon" meteorites. Muonionalusta meteorites looks superficially similar to Gibeon when cut and etched, however, in our experience they tend to be much more prone to rusting, much more common and much, much cheaper. Muonionalusta is what we refer to as a "Ruster" meteorite. When made into jewelry, Muonionalusta is often so unstable that it needs to be plated with some precious metal to temporarily keep it from rusting away. We were recently contacted by a Chinese jewelry manufacturer looking to buy large quantities of Muonionalusta meteorites for use in jewelry and for resale. We informed them that muonionalusta was not suitable for jewelry but that didn't phase them a bit. They said that they needed up to one ton of muonionalusta per year! They sent us a photo showing an example of their meteorite jewelry (which appeared to us to be plated). When we looked them up online, they were selling what appeared to be the exact same product as "Gibeon" meteorite jewelry! Who knows how much fake "Gibeon" has been sold to unsuspecting buyers. Unlike many, we are experienced professional meteorite dealers and we Guarantee our Gibeon meteorite's authenticity. Less experienced individuals could easily be fooled by the superficially similar appearance of muonionalusta to Gibeon, and given the large quantities of muonionalusta apparently being sold as Gibeon these days, it is even more important to buy from meteorite experts. Buyers beware! 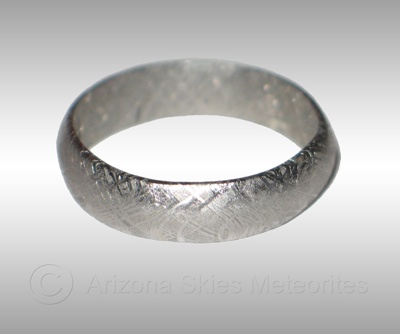 Back to our Iron Meteorite page

To place your order, or if you have any questions please feel free to email us: CONTACT
Arizona Skies Meteorites
P.O. Box 2412
Flagstaff, Arizona 86003


We can accept credit cards on most items (through Paypal), cashiers checks and money orders. Arizona residents add sales tax.